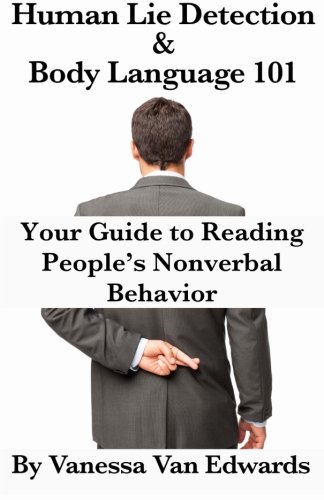 Do you want to know when someone is lying to you? In this book, you will learn both body language and lie detection. In a ten minute conversation you are likely to be lied to two to three times. Learn how to spot those lies. You will learn: *How to read body language *How to be a human lie detector *How to read people *How to detect hidden emotions *How to spot lies This body language book is based on scientifically backed research on the how to read people’s nonverbal behavior. Who Is This Book For? Whether you are a business owner, parent, spouse, employee, human resources director, teacher or student, this book will change the way you interact with those around you. Here are all of the people that can benefit from this book on body language: Employers Public speakers Doctors Human Resources Directors Poker Players Actors Students Employees Parents Teachers Entrepreneurs You! If you have ever interacted with another person, this book will be useful to you because our everyday interactions are filled with secret nonverbal cues just waiting to be uncovered. Because this book is based in real science, it will debunk some popular myths about lying. Lying Myth #1: If people look to the left, they are lying. If they look to the right they are telling the truth. Although there is some science about eye direction, which we talk about in the book. It is not the most reliable form of lie detection. The book will show you more accurate (and easier) ways to spot lies. Lying Myth #2: Liars can’t look you in the eyes. On average, honest people will make eye contact during conversations about 60% of the time–way less than you thought, right? Liars actually look you in the eye more because they want to seei f you believe their lie or not. Lying Myth #3: Emails and IM’s are filled with lies because it is easier to lie when people can’t see or hear you. In the book, I will tell you which of the following have the most lies: ___Emails ___IM’s ___Phone conversations ___Face to Face interactions I’ll give you a hint: Shockingly, we lie the MOST in phone conversations and the LEAST in emails. Why Is Lie Detection Important? It is important when we know we are being lied to because it can save us money, time and sometimes even our safety. This book can train you to get to the truth 80% to 90% of the time. That can save you money on a faulty house, from hiring a bad employee or making sure you know what is really going on with your child or significant other. Unfortunately, we are not good at detecting lies. We are only right about 54% of the time! That is a little better than a coin toss. We tend to assume the best in people and have a bias towards truth–”innocent until proven guilty.” In Human Lie Detection and Body Language 101 I give a number of real life examples and tons of practical tips that you will be able to use immediately. For example, wouldn’t it have been great to have known when Lance Armstrong was lying? Lance Armstrong Lies In his recent Oprah interview, Lance Armstrong’s body language was off the charts with lies and inconsistencies. He constantly made the “contempt” microexpression, which you will learn about in the book and showed how he really felt about the interview. He also showed a dominant and aggressive body posture and seating position. His words said far less than in his body. You can learn how to decode these popular culture segments on TV and in real life. If you find this case fascinating and wish you could begin to unravel the mysteries of body language, then get your copy of Human Lie Detection and Body Language 101 now!